You've got to love an AskReddit thread that pays homage to those basic skills that people are for whatever reason, plain old terrible at. It's funny how life works out like that. Sometimes, we just end up falling through the cracks when it comes to picking up tidbits of common knowledge that we should really have known in the first place. Some people's brains just operate at a different frequency, where they might have no idea how to write in a legible manner, no matter how hard they tried and were pushed to do so throughout their schooling. It ain't nothing to be ashamed of. Or, perhaps you're someone who has an impossibly hard time maintaining the flow of a conversation on the phone.

I mean, now more than ever we're so dang conditioned to communicate through texts, Snapchats, memes, etc. that when it actually comes time to formulate some words, and comprehensible sentences in a dialogue, your mind can end up going helplessly blank. Or, maybe you're one of those people who can't whistle to save your life. Whistling's hard, and shout out to the people in this world that can manage to whistle a tune. While others, can't even get the thing going in the first place.

An AskReddit thread like this can serve as a powerful, humbling, if not inviting reminder that you're not alone in your pursuit toward picking up those life skills and knowledge that you know you should probably know, but just can't quite seem to get. Maybe you have friends and family that have lovingly tried to help you put the pieces together along the way. Hopefully, not the opposite, where you're faced with fielding banter and roasts from people that love to make a mockery of you not quite being able to get there.

The overriding point is that patience is key, and above all else, who really cares at the end of the day if you can't whistle or write out a letter/card that other people will be able to read? The truth is, nobody really cares. Maybe for a hot second they'll get hung up on it, have a good laugh, and give you a nice old fashioned hard time. But then, then you move onward, and maybe you find in yourself a newfound desire to take the time to actually master the very thing that up until this point has escaped your attention. That can certainly be a proactive, productive way to lead a life. The very things that can initially give us the most trouble, can somehow evolve to be our special skills later on down the road. It's like, life loves to test you, throw you off your rhythm for a sec, and ultimately see whether or not you're going to accept the challenge. Challenges can be fun. There's always a nice little dopamine rush waiting at the end of mastering that thing that gave you so much trouble at the onset. So, maybe this thread will give you new inspiration, or at the very least, it'll make you feel better about those skills you're currently lacking. 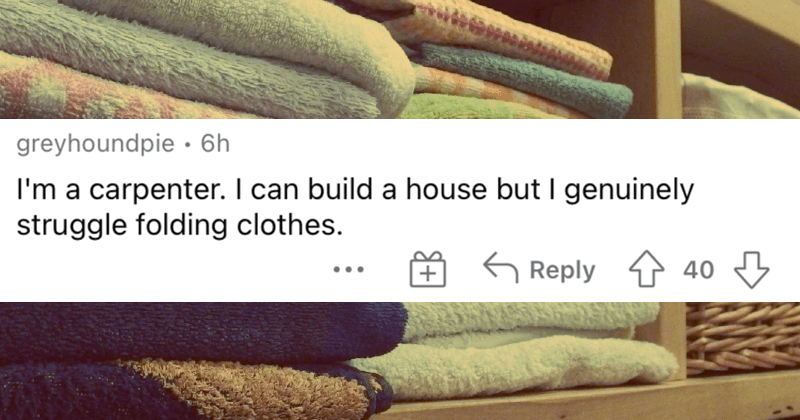 Memes For When There's Absolutely Nothing Better To Do

If you're running out of scrolling material, we've got news for you. The internet is absolutely overflowing with terrible and also entertaining material that will help you fight the boredom. The malaise. The ennui. When it's almost too much to bear, there's still a worldwide web full of memes. And we've got a bit of a sampler here for you. 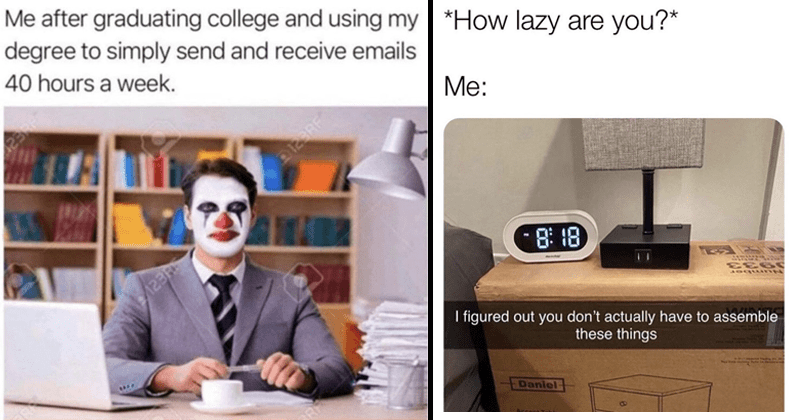 So have even more funny tweets to keep your mind off more urgent matters and have a chuckle or two along the way. 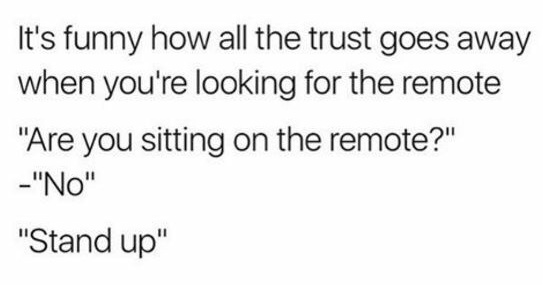 Strap yourself in for some clever thoughts using a limited number of characters. It's time to let your brain check out for a bit, and let the more primitive side dominate. But instead of rubbing sticks together or carrying off a potential mate to a cave, just check out these funny tweets that will definitely resonate with you. 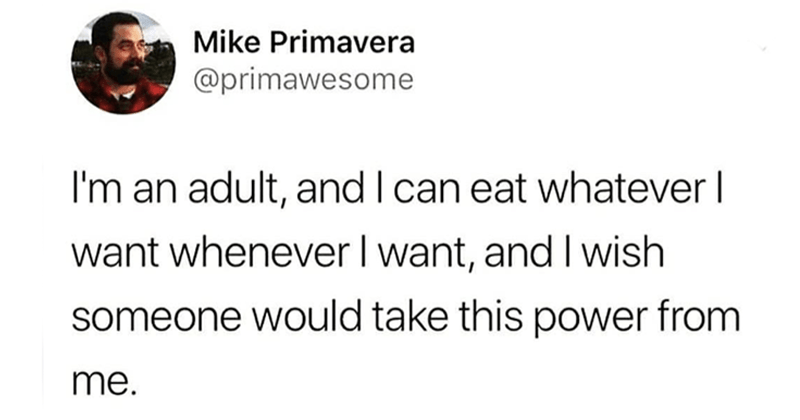 These memes really hit us where it hurts! Right in the feels. Keep the sucker-punches coming with even more savage Spongebob memes If you had any to begin with. But you don't your an empty homonculus like the rest of us. So brush it off and keep on grinding.

Just like Patrick and Spongebob somehow became the epitome of insanity in their daily attempts to remain as bumbling and gormless as ever, we have an endless supply of hilarious Spongebob classics to supply you with. Or, if you want to walk down memory lane with some of Spongebob's finest moments, you definitely won't be disappointed, and might even remember something you forgot. 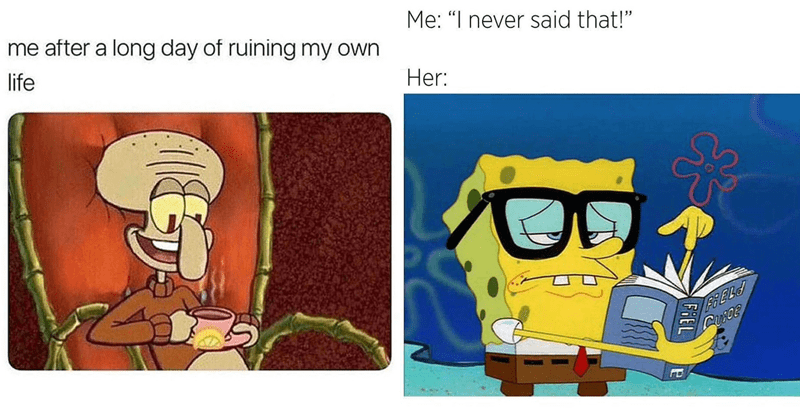 30 Relatable Memes That Hit A Little Too Close To Home

We've all been there.

That is what makes these memes so relatable.

And then consume these 60 funny memes to help round out all that relating. 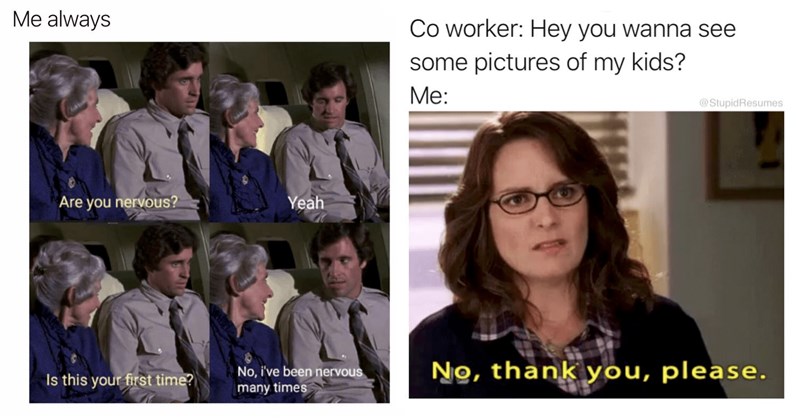 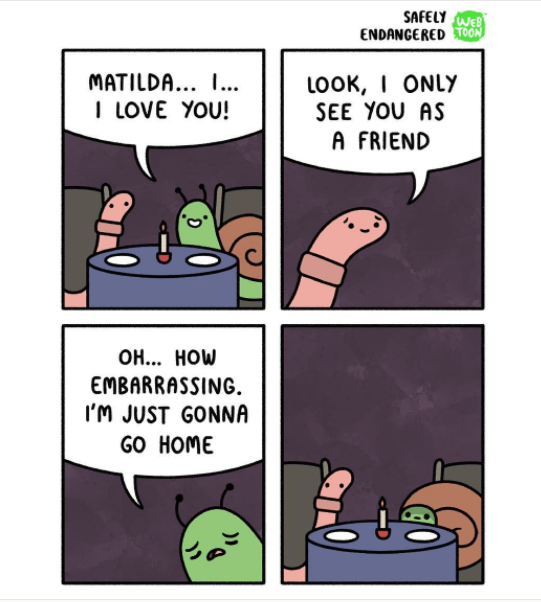 Tippi Hedren, perhaps most famous for her role in Alfred Hitchcock's The Birds, is an actress of formidable gifts. But her role as an animal-rights activist and conservationist might well be Hedren's most lasting legacy. For decades, her Roar Foundation and the animal sanctuary, Shambala Preserve, in California have advocated for big (and not so big) cats—from lions and leopards to bobcats and servals—and she's been honored with a host of humanitarian and conservation awards through the decades.

In 1971, LIFE photographer Michael Rougier spent time with Hedren; her teenage daughter, Melanie Griffith, her then-husband, the agent and movie producer, Noel Marshall; and others at their home in California. Also in attendance: Neil, a 400-pound mature lion, who occasionally slept in the same bed as Griffith and, as these pictures attest, had the run of the house, from the kitchen to the living room to the swimming pool.

Decades and several attacks later -- one lion clawed daughter Melanie Griffith in the face during the production of the 1981 film Roar and required that Griffith undergo surgery -- Hedren admitted that having a lion live in her home alongside her children was "stupid beyond belief." 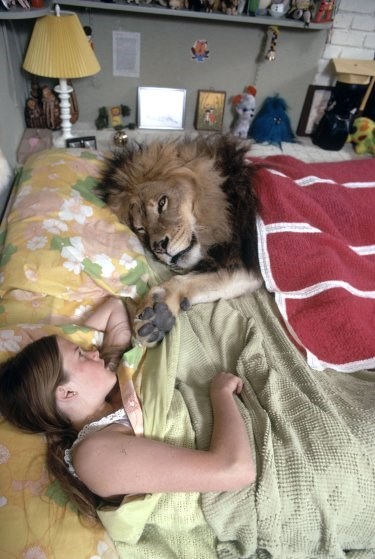 Ultra Helpful Tips and Tricks From a Duck

Sometimes we won't listen to other people, but maybe we will listen to this duck! Here are some helpful tricks and tips for daily life that well... make life easier! 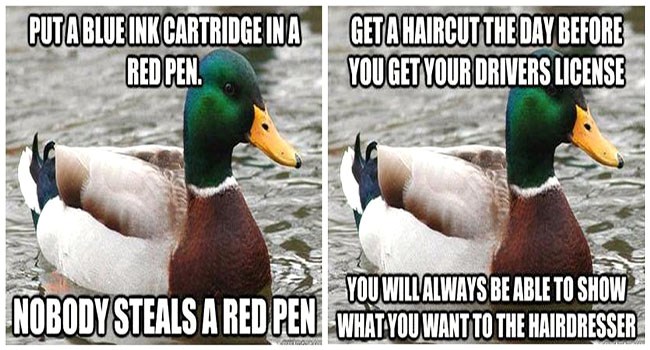 30 Hilarious Memes That Nails Life As a Single

Any single girl will understand 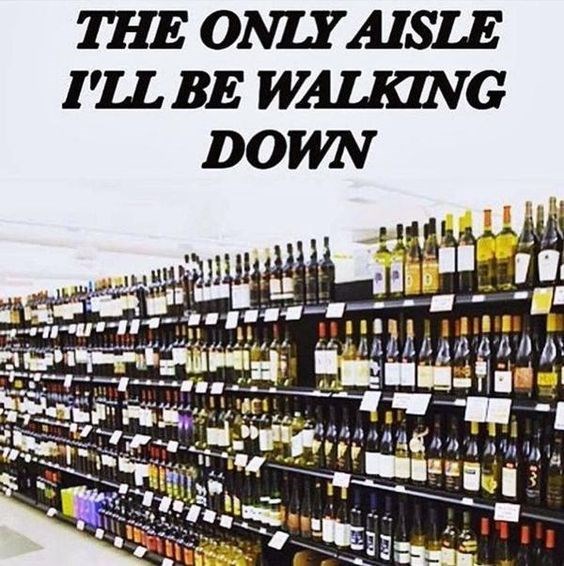 Our bodies might be back at the grind after the holidays but maaaybe our minds don't have to be. 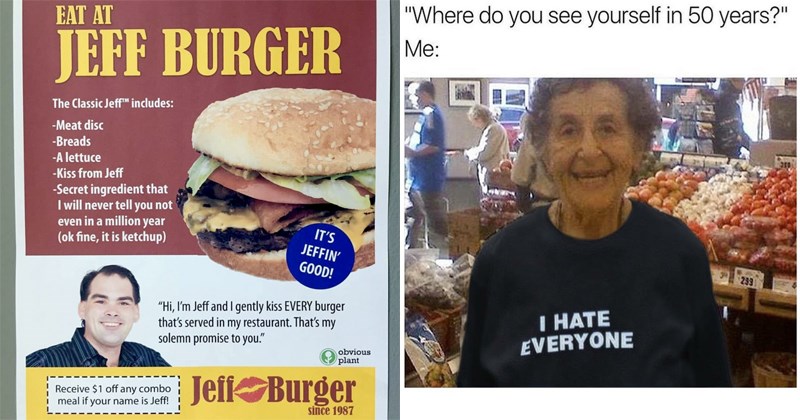 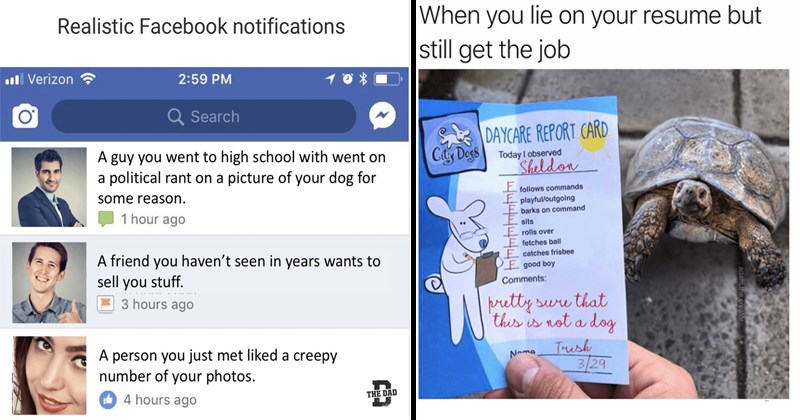 22 Random Memes to Get Your Friday Started 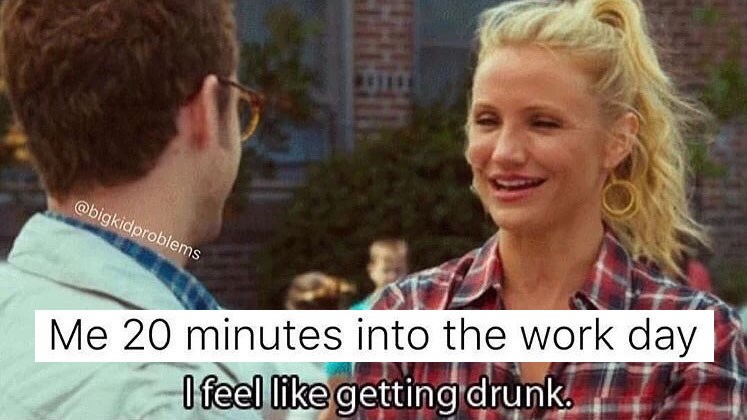 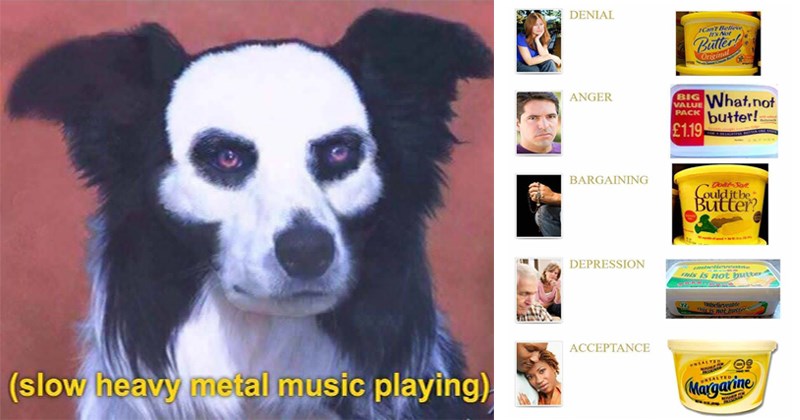 Just some random memes and tweets to help you fight those Sunday blues. We'll get through this. 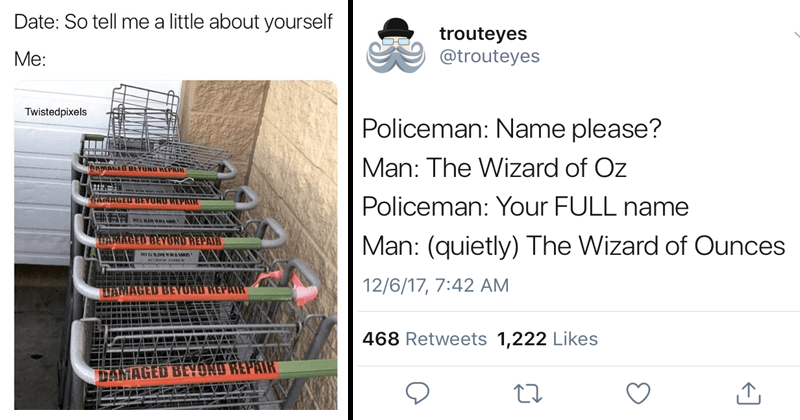 We wrote earlier about "things we don't like" memes, and this one is pretty related. For this particular format, memers generally google someone or something they love (very popular within the animemes community) and then the life expectancy. When it's revealed that their favorite character is near-death, we're met with a weeping face. The meme can be used in the opposite way, as is seen with one of the Lil Pump memes, to lament that someone will be living so long. The meme is pretty basic, but some people are having fun with it. 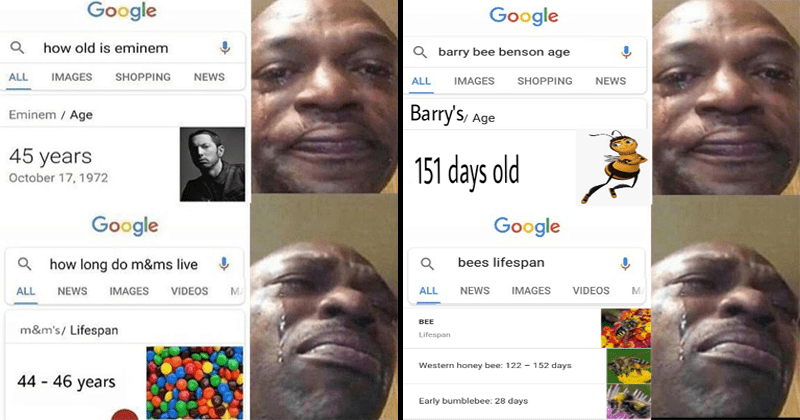