Collection of the Day: The TSA Has a Trove of Lost Laptops and Weapons 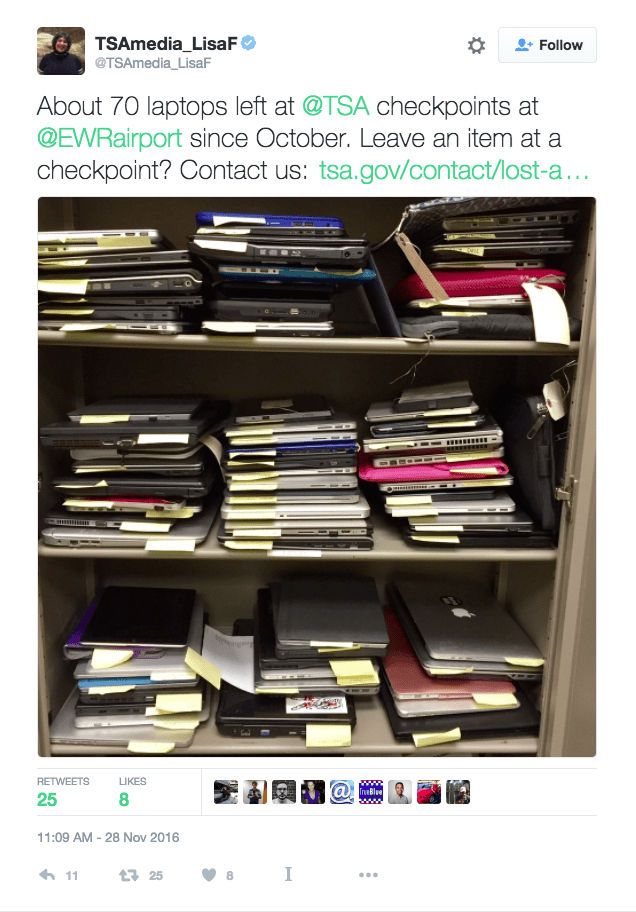 Everyone in America knows that laptops grow on trees, and there’s no greater proof of this than the TSA’s massive collection of laptops.

The TSA tweeted last week that about 70 laptops — mostly expensive MacBooks by the looks of it — that were left behind at security. Whatever, these people will just walk over to the magic laptop tree and grab a new laptop.

People are regularly doing things like that. Mashable reports, “In a 2014 story, Capital Public Radio in Sacramento, California, reported that roughly 20,000 items, each priced at $500 or more, were left at checkpoints around the country. Those items eventually get sent to TSA's Virginia headquarters, while less valuable objects make their way to re-sale shops.”

If you’re one of the few people who cannot just walk over to the laptop tree and pick a new laptop, there are steps you can take. In addition to sending a message to the TSA on Twitter at or Facebook, you can call their Lost & Found. Just in case you forgot your loaded gun or fingernail thingy.

Clarksburg, MD, man showed up at a Dulles Airport @TSA checkpoint with this gun yesterday. Claimed he forgot he had his loaded gun with him. pic.twitter.com/cjwYkfIuEs

Tech of the Day: “Doom” on a MacBook Touch Bar is the Reason the Touch Bar Exists

For better control in video editing, photo editing, or just sending emojis, the new Apple MacBook Touch Bar has a lot of perks, but Apple still buried the lead on this one.

Apparently, you can play a super smushed version of Doom on this thing.

Sure, the Touch Bar is a great way to bring Apple Pay and Predictive Text to the desktop. Replacing the physical function keys at the top of the keyboard, the Touch Bar is a digital interface that's touch sensitive and totally customizable. It’s another great innovation from Apple that allows a wider range of control for users. More importantly, you can play a version of Doom on it that looks like it was crushed by a vice.

Developer Adam Bell crammed the 1993 classic in all of its glory to run on the the narrow 2,160 x 60 pixel OLED touchscreen. Is it pretty? Hell no. Is it pointless? Absolutely.

Announced at the Apple Event in October, the Touch Bar was the centerpiece of the new MacBook Pro laptops. The tech giant hoped to bring some of the benefits of touchscreen computing that has revolutionized handheld products, like the iPad and the iPhone. In doing so, they have given developers yet another place to stick the class video game Doom, and we’re all better for it.

Recap of the Day: Apple’s New Macbook, Apple TV, and more from the Apple Event

Apple's new Macbook doesn't just give feels, it requires them.

Announcing a new line of Macbooks today, Apple introduced the world to the Touch Bar, a digital interface that lives at the top of the keyboard, replacing the function keys. The Touch Bar gives users a whole new range of control on things like video editing, audio recording, and sending emojis.

As is their wont, the company made it clear that these are the thinnest and lightest Macbooks to date.

Despite announcing new AppleTV software and accessibility features, this event was about two things for people: Touch Bar and Price. With two new Macbooks coming in at $1,799 for a 13" model and $2,399 for a 15" model, many were pretty surprised and somewhat baffled by the price increase.