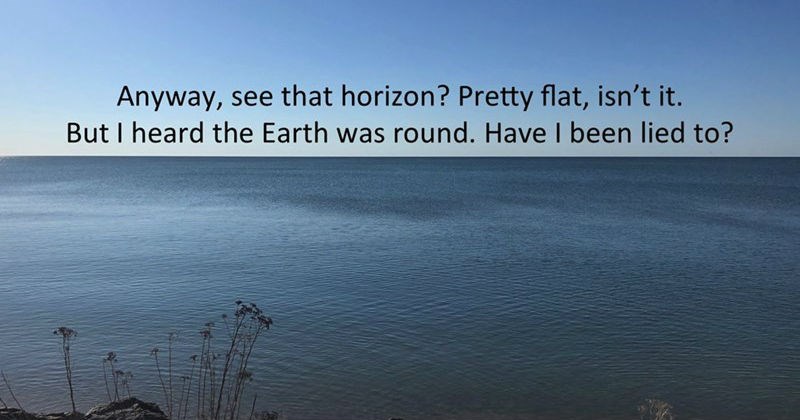 When you post a wholesome meme, remember that there are people out there very willing to put in some effort to undermine the message and make themselves feel bad. It's a lot for this guy, right out of the gate to assume only 1% of people find him unattractive, but what else can we do but take his word for it. Math is fun! 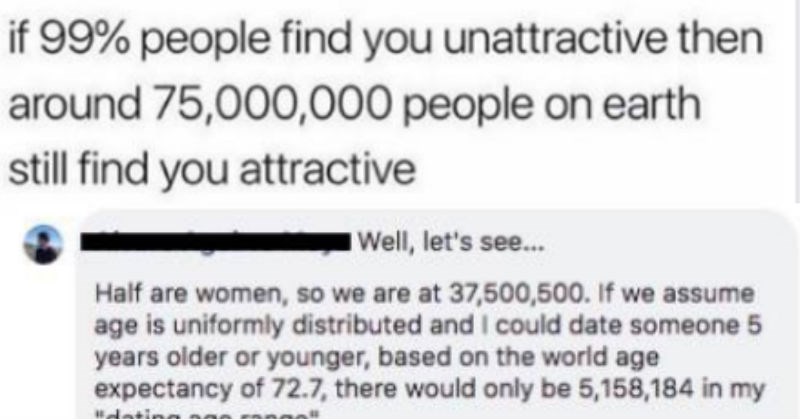 Apple recently revealed that their new $5000 dollar computer does not come with the stand. Here's a video of them unveiling their thousand dollar stand. Thanks Apple. Anyway, the internet did what it did best and did the math on the other things you could buy if you have $999 laying around. Choose wisely. 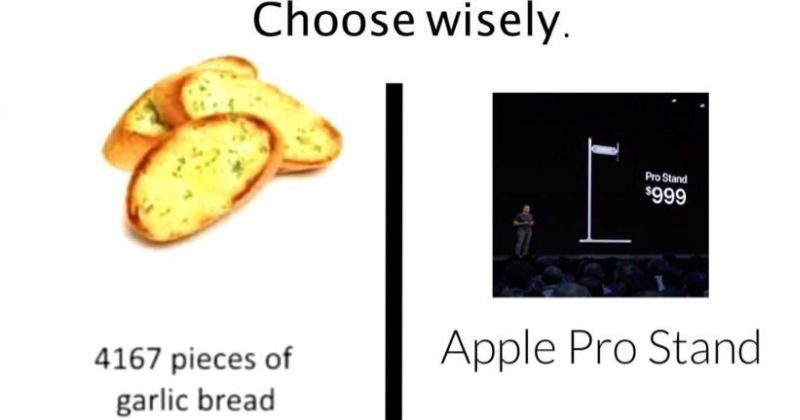 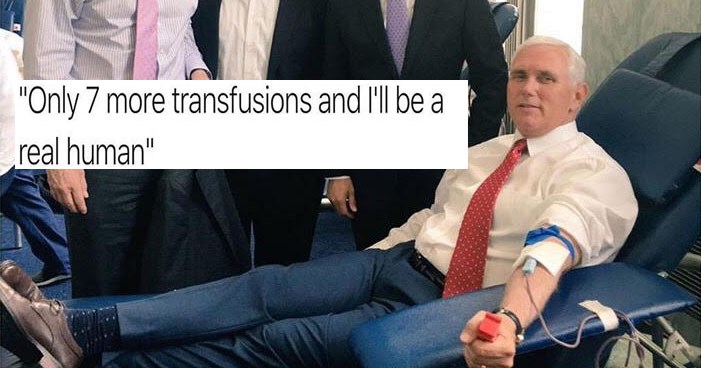 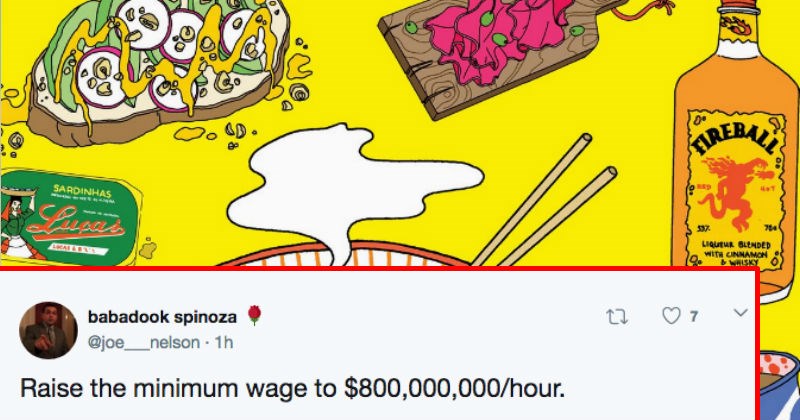 You can't afford to live without these... 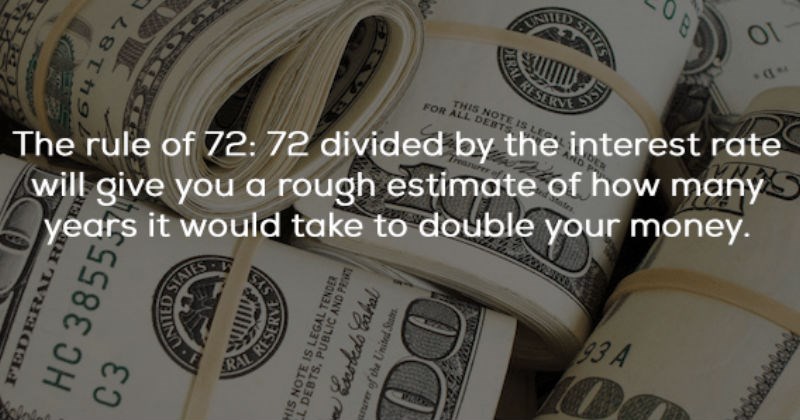 13 Smug Memes For The Snobby Intellectual

Are you smarter than the average pleb? Do you find yourself making jokes that no one else seems to understand? If so, these intellectual memes are for you! 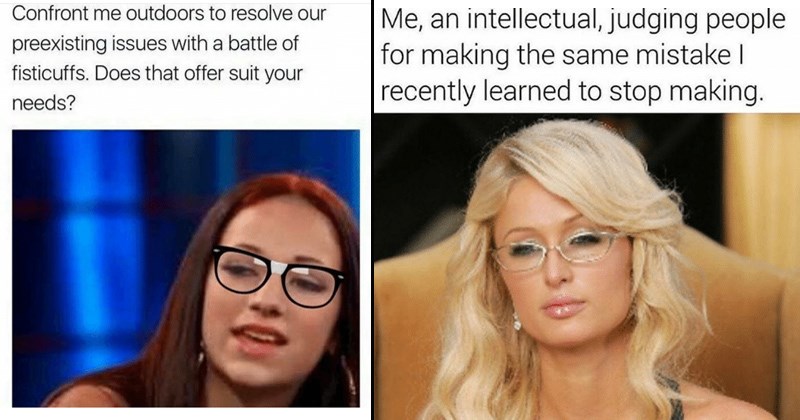 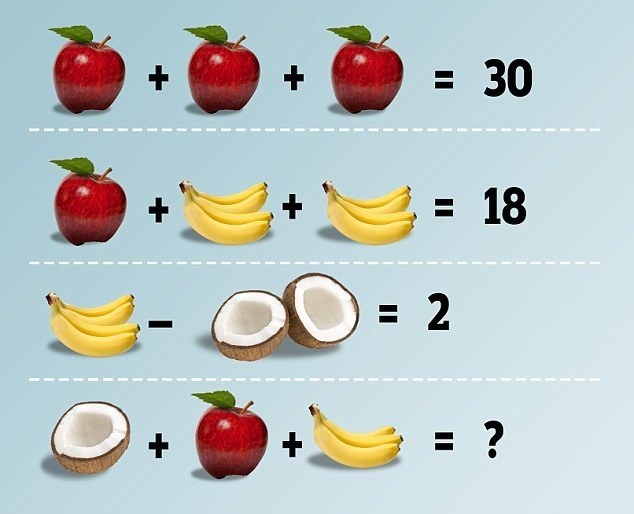 This is one of those "brain teasers" that often pop up on Facebook with an annoying and statistically ambiguous title like "Only 5% of the population know the answer to this puzzle!" According to The Daily Mail, this one has been floating around since December.

For once the people in the comments actually have something worth arguing about. You may not have noticed at first but the illustrations in the last equation are different than all the other ones. Let's walk through it.

First, apples definitely equal 10, that much is clear. From the next equation you can guess that each banana bunch equals four. Now we can assume that the coconuts equal two.

This has people arguing about whether the concept of the fruit is a constant number or if that number can change as the picture of the fruit changes. To make matters worse, Dr Kevin Bowman, a Mathmatics course leader at University of Central Lancashire spoke to the Daily Mail to try to "clear" things up.  According to him, they can represent whatever you want since the only unambiguous fruit is the apple. Also, everything you thought about coconuts is wrong. He concluded his interview with this:

You might even say that the two coconut pieces in the third equation are different sizes, and therefore add up to three quarters or even seven eighths when put together.

In that sense, there are an infinite amount of possible answers.


So no one can know the real answer until, somehow, the commenters on Facebook reach some sort of philosophical consensus on how we treat visual representations of fruit.

Sassy Response of The Day: Fourth Grader Shows The Meaning of Girl Code on Math Homework 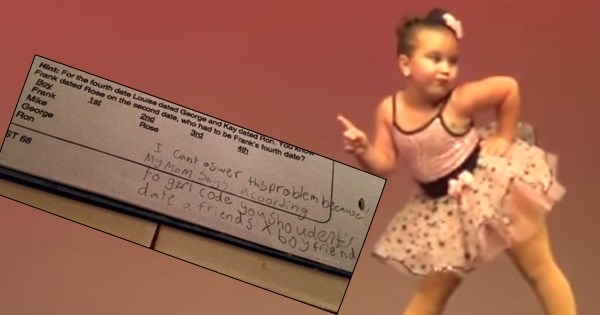 The power of "Girl Code" is strong.

Fourth grader Maddy Douglas was filling out her math homework when she came up with this super sassy answer to a word problem.

The problem sets up a scenario where a group of 4 high school girls and boys go on different dates with each other. It's one of those awful matching problems where you have to find out who X went on a date with at X time.


Maddy wasn't having it. "I can't answer this problem because my mom says acoording to girl code you shouldn't date a friends x boyfriend," she proudly wrote down.

Mom Jenn Douglas told The Huffington Post, ""Her teacher laughed at her answer and told her 'Good point.'"

Genius of The Day: This Kid Had The Best Answer Ever to a Simple Math Problem 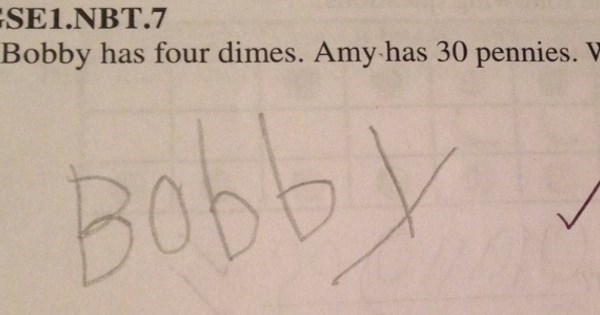 This kid is well ahead of the class. He's already discovered sarcasm.

A proud parent posted the hilarious answer on Reddit their student gave when asked to show work on a math problem.

And it is amazing. The 6-year-old boy answered the math problem correctly. But instead of showing his work (Four dimes is $.40, which is greater than $.30) he drew this amusing stick figure.

"This is why my kid is going places," the boy's mother wrote.

Hold on mom, it looks like you have a genius on your hands!

WTF of The Day: People Are Really Angry Because This Math Strategy Says '5+5+5=15' is Wrong 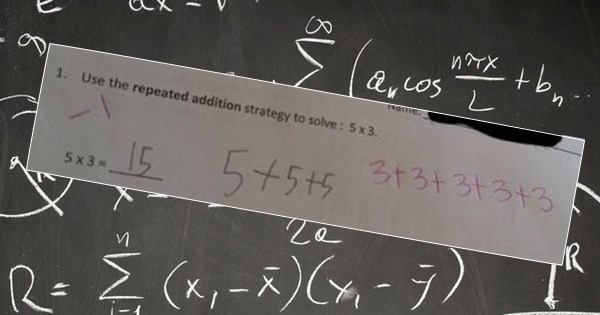 Any sane person with a second grand education would call your bluff. But they'd be wrong. At least, according to the Common Core curriculum.

A photo of a student getting this answer wrong blew up on Reddit last week, causing mayhem across the Internet. Supporters of Common Core say that adding 5 groups of 3 together is correct because that strategy will help students once they reach more advanced math.

Back in September, a dad wrote a check in "Common Core math" to show how strange some of the strategies are. And Common Core has become a hot button issue in the GOP presidential election. The Donald has come out against the academic standards while Jeb! has long support them.

"@RebelCapsGal: @realDonaldTrump THANK YOU for speaking out against Common Core and how horrible it is for kids!"

Math of the Day: Sesame Street’s The Count Reads Pi to 10,000 Decimal Places

Youtube user Crysknife007 (purveyor of "ambient geek sleep aids and other eccentric long videos") has created a true monster out of your favorite Sesame Street vampire, with audio of The Count reading every digit of Pi out 10,000 decimal places.
The maddening video is 5.5 hours long, and includes his signature laugh in between each digit.
If you're curious how he accomplished this, you can read about the process on his blog, where he describes creating a similar video but with a rotary phone dialing each digit.
So how far can you listen before tearing out all of your hair and bashing your face against the wall?

App of the Day: PhotoMath Shows the Step by Step Process to Scanned in Math Problems

Educational standards are always changing, and the math you took in elementary school probably bears little resemblance to what kids see today. Comedian Louis C.K., frustrated with what his kids have to deal with, posted his report to twitter. What do you think about the change in curriculum? 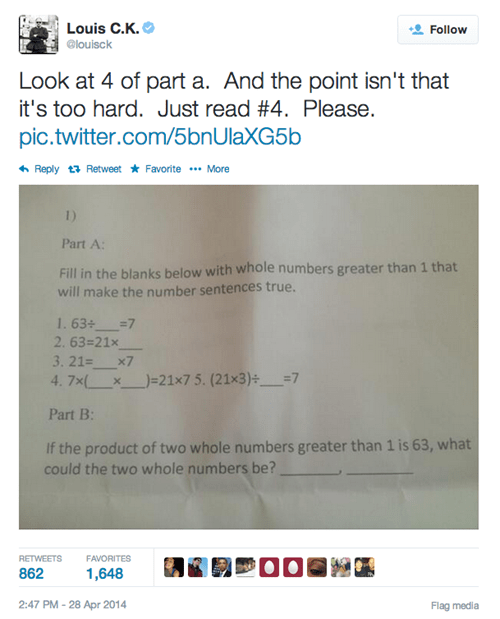