You may not think that Jack Black, Morgan Freeman and Orange is the New Black's Natasha Lyonne care a whole lot about the the White House's possible deal with Iran over the development of nuclear power facilities, but they do.

The celebrities join some notable political figures and even former spy Valerie Plame in drumming up support to pass the deal and to ask citizens to call their senators to ensure that the deal makes it through the Senate.

Viral Video of the Day: Morgan Freeman is the Only Person Who Can Still Sound Dignified After Breathing Helium

Via VidsVids
Repost
Recaption
Advertisement
The Daily What
Favorite

Meanwhile in India of the Day: Morgan Freeman Mistaken for Nelson Mandela on Billbaord 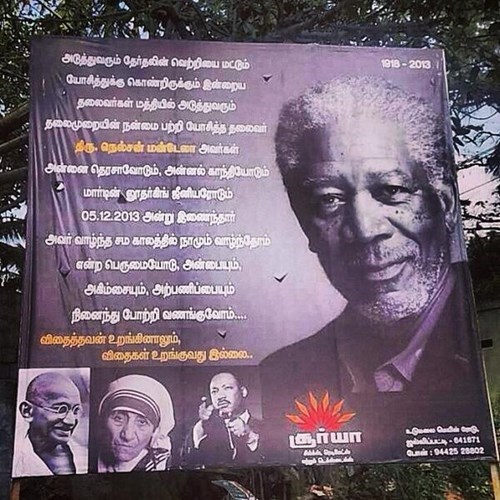 A public sign has been displayed in Coimbatore, India to commemorate Nelson Mandela but ended up being a huge FAIL when an image of American actor Morgan Freeman was mistaken for the late president of South Africa. Alongside Freeman, the poster also includes images of Mahatma Gandhi, Mother Teresa and Martin Luther King Jr. According the the Huffington Post, the included text translates to the following:

Among today's politicians who cannot think beyond the next election cycle, Nelson Mandela was a leader who thought of the well-being of future generations. He went to join Mother Teresa, Mahatma Gandhi and Martin Luther King on 5.12.13. We bow down to him, proud to have lived during his time on earth and praise his message of love, non-violence and sacrifice. "The farmer may sleep, but the seeds he planted never will.

The man responsible for the poster plans to have it amended.

Photorealism of the Day: Most Realistic Finger Painting Ever

Using only and iPad Air and a finger, artist Kyle Lambert painted an incredibly photorealistic image of Morgan Freeman in just over 200 hours.

Morgan Freeman Reads Fifty Shades Of Grey of the Day

Disclaimers: Not actually Morgan Freeman, but Family Guy voice actor Josh Robert Thompson, who is so talented it'll creep you out just the same. Also, this is book two. 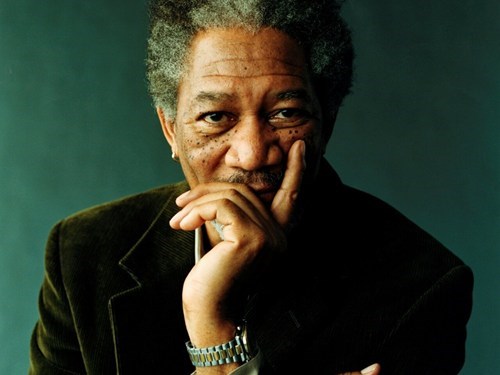 Oscar-winning actor Morgan Freeman appeared on NPR's Tell Me More on Thursday to help promote two of his upcoming films, The Dark Knight Rises and The Magic of Belle Isle. The discussion with host Michael Martin took a political turn, and Freeman offered his thoughts on President Barack Obama and the racial qualifications of a black President:

However, Freeman went on to say that he thinks President Obama has been unfairly treated by his political opponents since taking office, and criticized the Republican Party for being uncooperative during his first term.

Impersonation of the Day

It's one thing to impersonate Morgan Freeman. It's entirely different when the impersonation evolves into a string of haikus which seemingly could have been written by the man himself.