It’s one thing to get a little annoyed at anyone posting too many baby pictures on Facebook, and then there’s this.

‘700 Club’ host Pat Robertson was answering some viewer mail on Monday, and he got one from a woman who wanted to know if it was safe for her daughter to post a picture of her unborn child online.

She wanted to know if this would have any harm, spiritually.

And then Roberston went all “American Horror Story” on us.

“There are demons and there are evil people in the world,” he said. “And you post a picture like that, and some cultist gets a hold of it or a coven and they begin muttering curses against an unborn child.”

As a reminder, this is the same man who thinks gays with AIDS wear rings to purposely cut and infect people, joked that man should move to Saudi Arabia to beat his wife and called the 2010 earthquake in Haiti a “blessing in disguise.”

Conservative Position of the Day: Pat Robertson Even Thinks Ken Ham is Crazy

"Let's be real, let's not make a joke of ourselves"

Discussion Topic of the Day

Asked on his The 700 Club if oral sex between a husband and a wife is a sin, televangelist and marijuana legalization advocate Pat Robertson appeared to suggest that BJs and muff dives are cool with the almighty, so long as all parties involved "feel in their heart" that it isn't a sin.

Did God just put his imprimatur on Steak and BJ Day? I think so.

Unexpected Endorsement of the Day 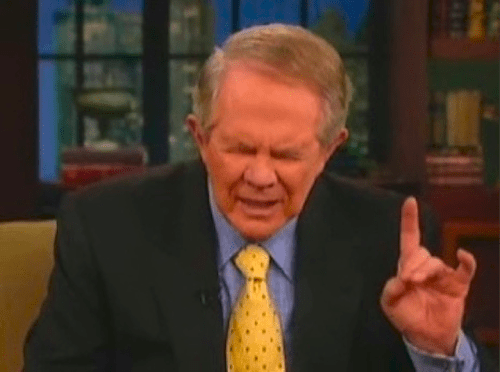 In an interview this week, Robertson said he believes marijuana should be treated "the way we treat beverage alcohol," and came out in support of decriminalization measures that will be on the ballot this fall in Washington and Colorado.

"I've never used marijuana and I don't intend to," he said, "But it's just one of those things that I think: this war on drugs just hasn't succeeded."

His newly-public position wasn't inspired by any particular event, he said. He just believes that America "has gone overboard on this concept of being tough on crime," and that current penalties for pot possession are too stiff.

Robertson isn't troubled by accusations from other conservatives that he has "forsaken the straight and narrow" with his pro-legalization views.