If there’s one thing Star Wars fans do, it’s argue. Who could win in a fight, Darth Vader or Darth Maul? Who’s stronger, Boba Fett or IG-88? Who wore it better, Princess Leia or R2-D2?

They could go on and on across the galaxy — and by galaxy, we mean internet.

But there’s one argument that needs to be put to rest: Are Daisy Ridley from Star Wars: The Force Awakens and Felicity Jones from Rogue One: A Star Wars Story the same person?

Appearing MTV After Hours, Felicity Jones shot a quick PSA as to why these two brown-haired, British women are not the same person, despite what you may have heard. She also throws out a pretty solid spoiler for any annoying fan conspiracy theorists out there.

You’ve got to check this out.

Firestarter of the Day: Patient's Fart Starts a Fire in Hospital 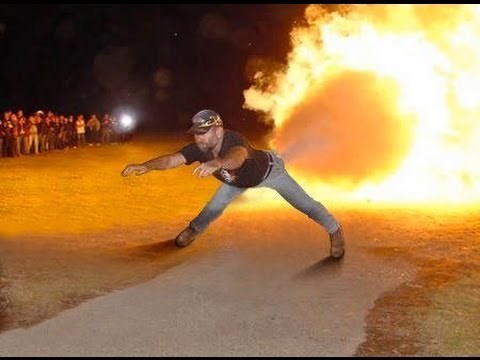 Via The Sett Life
Repost
Recaption

People hold in their farts where they're in mixed company. It's called being polite. But sometimes, when we're at our most vulnerable, supressing a fart can prove impossible, and the results can be dangerous.

This Tokyo woman found that out the hard way, when during surgery, she passed gas and caused a fire that left her seriously burned.

"The patient, in her 30s, was undergoing an operation which involved applying a laser to her cervix, the lower part of the uterus," reports The Straits Times. "The laser is believed to have been ignited by the gas she passed. The fire burnt much of her body, including her waist and legs"

After a thorough investigation, which found that no flammable materials in the operating room, the hospital determined that flatulence must be culprit. No word as to whether the patient denied it and, thus, supplied it.

"When the patient's intestinal gas leaked into the space of the operation (room), it ignited with the irradiation of the laser, and the burning spread, eventually reaching the surgical drape and causing the fire," said the hospital report.

Let this serve as a warning for all of us. Sure, they make a funny noise, but farts can be deadly. Even the silent ones. Farts are gas. Please stop lighting your farts before someone gets hurt.

The Zika virus is spread mainly by mosquitoes, although it's recently been found to be sexually transmitted as well. Researchers believe it is linked to birth defects like microencephaly.

This video from Jamaica's health ministry warns people to get rid of all standing water that mosquitoes that carry the virus can breed in. It also encourages people to use mosquito repellent and that pregnant women should take extra care.

It's also super catchy for a government sponsored message about public health.

PSA of the Day: Cats Overload the Internet to Draw Attention to Crowded Shelters

While that may sound like a lovely time of year, filled with fluffy tummies and tiny meows, it actually refers to the time of year when animal shelters are hit the hardest. Around this time is when all of those amorous cats who copulated over the spring have their litters. Many don't have happy healthy homes and so are stuck within shelters.

Mashable introduced an IRL cat video to help draw attention to the need for rescue help.

While there's definitely enough space for infinite cats on the Internet, finding space in animal shelters is a different story. Mashable teamed up with ASPCA to shed light on "kitten season." Between the months of April and October, shelters across the country find themselves flooded with kittens in desperate need of homes. To get involved, whether you're looking to volunteer, donate or adopt, visit an animal shelter near you.

If you need a new friend or know someone who does, you can find the nearest shelter here.

You actually can make this a Happy Kitten Season for yourself. Go and rescue!

Pandering towards that part of us all that wants to make the Friday Night Lights father figure proud, the Austin-based movie theater chain hired Kyle Chandler to reprise the role.

What appears to be the start of another moving and effective speech before another big game gets interrupted by the thoughtless youth with their bleeping and buzzing cellular doodads. Coach loses it and we all feel as shameful as Matt Saracen must have felt when he got drunk with Riggins in the strip club in season two and Coach had to drive him an his injured grandmother home from the hospital. Remember?

The English language should really have one of those specific words to describe what it feels like to disappoint Coach Taylor.

Anyway, the PSA drives the point home in spectacular style with Coach changing the Dillon Panthers' credo into something more on-message for movie theater politeness.

When Jimmy Fallon announced that the pop star had won the Video of the Year award for her hit song, "Wrecking Ball," Cyrus passed up the chance to thank her producers and managers for helping her achieve her goals. Instead, she sent up a former homeless teen to deliver a short speech intended to raise awareness about the issue of homeless youth.

'I have survived in shelters all over this city,' Jesse, Cyrus' proxy, said, describing his experience as one of the 1.6 million homeless young people in the United States. 'I've cleaned your hotel rooms, I've been an extra in your movies. I've been an extra in your life. Though may have been invisible to you on the streets I have a lot of the same dreams that brought many of you here tonight.'

This Kid is the Happiest Boy in the World Right Now

Via NCPGSingapore
Repost
Recaption
The Daily What
Favorite

Viral Video of the Day: This PSA is Funny But Has a Serious Message

These Renegades Are Tired of Public Urination in India, and They Have a Plan to Fix it

Viral Video of the Day: This PSA Takes a Very Unexpected Turn

Stay in school kids... or else.

PSA of the Day: An Average Man and a Parkour Expert Show Why it's Smart to Have Health Insurance

Nacho Punch has come up with a creative way to encourage you to get health insurance. It Stars an "average man" attempting to perform trick-for-trick with a parkour expert.

Zurich advocacy group Pro Infirmis created this moving video in which mannequins were created not in the form of perfection, but to display bodies of the disabled with diseases like scoliosis or those with missing limbs. The mannequins were displayed in department store windows with the hope that they would bring further awareness to narrow expectations of fashion and support the acceptance of those with disabilities.

Musical PSA of the Day: Get Off the Phone

We all know that person (or people) who can't ever seem to put down the phone and enjoy life without a screen between their face and the rest of the world. This is a message for them from Rhett & Link.

PSA of the Day: The Internet's Favorite Astronaut has a Message About Movember

Astronaut Chris Hadfield who became famous for his hundreds of YouTube videos made from space, is now back home and has a "down to Earth" message about Movember.

PSA of of the Day: An Apple a Day Could Save Thousands of Lives

We've all heard, "An apple a day keeps the doctor a way." This video presents an entirely different perspective on how that single act could do so much more.

PSA of the Day is a feature series presenting a variety of notable public service announcements and cautionary messages.

Parody PSA of The Day: Millennials Apologize for Sucking So Bad

This sarcastic PSA video brought to you by Can Opener Studio offers a series of apologetic messages from the Millennial Generation for being unemployed, crippled by student loan debt and texting too much in an economy void of the manufacturing jobs that were once readily available for the baby boomers and their parents' generation.