Viral Video of the Day: Pussy Riot's New Song and Video "Putin Will Teach You How to Love the Motherland" Features Their Whipping and Why Russia Should Be Free From Putin

Warning: Both this video and the one linked below are very graphic.

A video released Wednesday showed members of the Russian punk band Pussy Riot being beaten by Cossack militia in Sochi as they tried to film a music video at the port of the city that is hosting the Winter Olympics. Parts of that video has been used to release this new song.

1/3 Of Pussy Riot Goes Free of the Day 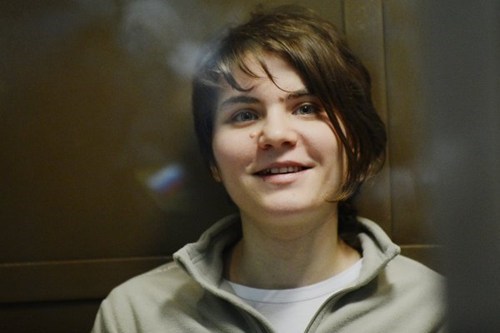 Via The Cut
Repost
Recaption

The good news: One member of Pussy Riot, Yekaterina Samutsevich, was released from prison today on probation; her lawyers argued earlier this month that because the 30-year-old was kicked out of the cathedral shortly after entering, she was not part of the "aggressive movements" that offended Russia's Orthodox church and resulted in the trio's imprisonment.

The bad news: Samutsevich's bandmates, both of whom are younger than her with small children, will be transferred to a prison colony to serve out their two-year sentences.

Breaking News of the Day: Pussy Riot May Be Freed From Jail 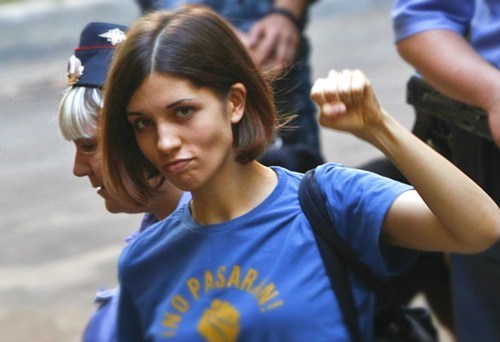 About time -- Russian Prime Minister Dmitry Medvedev announced today that the three imprisoned members of Pussy Riot will be freed, saying further time behind bars would be "unproductive."

The band members' case comes up for appeal October 1.

The women already had spent more than five months in jail when they were convicted in August of "hooliganism driven by religious hatred" and sentenced to two years in prison.

Breaking News of the Day: Pussy Riot Gets 2 Years In Jail 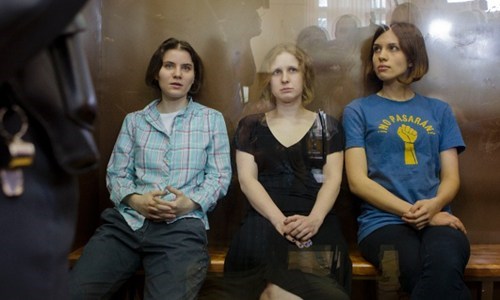 Meanwhile in Russia: Three members of Russian punk band Pussy Riot each have been sentenced to two years in jail for an obscenity-laced performance at Moscow's Christ The Savior cathedral in February in which they were so bold as to criticize Russian President Vladimir Putin.

The women -- Nadezhda Tolokonnikova, 23; Maria Alekhina, 24; and Yekaterina Samutsevich, 29 -- are made of tough stuff. As the verdict came down, and a shout of "Shame!" was heard in the courtroom, they just laughed.

Here's the shocking performance that started it all.