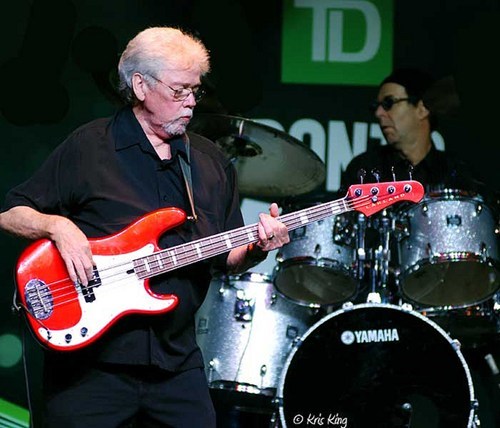 Soul fans are mourning today as Donald "Duck" Dunn, a staple of the southern soul scene passed away at the age of 70.

Dunn was most notably the bassist in Booker T & the M.G.'s, as well as a highly regarded session player for Stax Records. During his time as a session bassist, Dunn played on recordings by Neil Young, Eric Clapton, Tom Petty, and the Blues Brothers. He also appeared in The Blues Brothers film.

Dunn leaves behind a legacy that's still echoed in today's contemporary music, reflected in acts as diverse as Lucero and Ludacris.

Though he might be resting comfortably making money off of Justin Bieber, Usher is the subject of a mashup that finds 2009's "Papers" mixed in with the lamb that says "Yeah." It's groovy and it's a pretty BAA-d remix.

Drake surely has to be the clumsiest rapper alive. A few years ago, he fell on stage and tore his ACL and last night, while in the UK, Wheelchair Jimmy took a step back and fell on his tookus (as the Brits say), much to the horror of 13 year old British teens. Forward to 1:30 to see what happens when swag takes precedence over familiarizing yourself with your surroundings.

Drake (aka Wheelchair Jimmy from Degrassi: The Next Generation) released two videos, one of which features Drizzy recreating his Bar Mitzvah...just in time for Passover! Huzzah! Sadly, this also marks Drake being a far more recognizable Jewish rapper than the Beastie Boys.