Viral Video of the Day: GoPro Inside Water Bubble… in Space!

This GoPro camera has boldly gone where no GoPro camera has gone before.
Well, they have been nearly everywhere at this point, but this one is definitely hard to beat.
Over the summer, astronauts from NASA and the European Space Agency inserted a sealed GoPro camera into a water bubble to investigate water surface tension in microgravity on the International Space Station.
They also shot the video with a 3D camera, so if you have red-blue stereoscopic 3D vision glasses, you can watch that version here.

Photo of the Day: Check Out This Close-up Shot of a Solar Flare 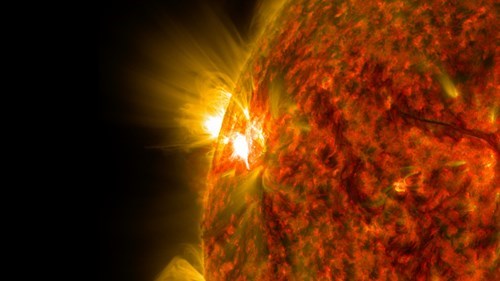 OMG. Is it the end of the world? Is everyone we love and care about soon to be incinerated by a massive radioactive blast from the sun? Will my iPhone still work?
This image, take by NASA's Solar Dynamics Observatory, is actually a mid-level M-class flare, and one of several that have occurred in the same spot over the past few days. They are harmless and can't pass through the atmosphere, according to NASA, but stronger flares have been known to affect GPS and communications on Earth.
There was a streak of more intense X-class flares during the last week of October, which the Space Weather Prediction Center is calling "one for the history books."

Space Video of the Day: Fireball Meteor Appears Above Japan

The people of Japan were surprised Monday night by a giant fireball shooting through the sky.
Was it Godzilla warning of his arrival or an alien pod soaring down to Earth to initiate an invasion?
Not quite, but it was still cool to watch. Experts say it was probably a bolide or "fireball" meteor, a piece of an asteroid that ignites upon entering Earth's atmosphere.
But that's what the aliens would want us to think, right?

The Physics of Space Battles

Via It's Ok to Be Smart
Repost
Recaption

Get the Guided Tour of Earth, from Space!

This Day in Science: June 18th 1975, Americans & Soviets Meet in Space for the First Time 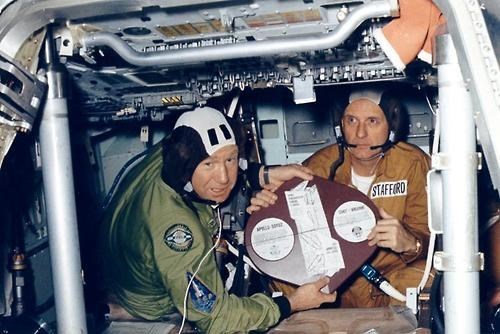 Space Shot of the Day: Animation of Six Decades of a Warming Earth

This newly released video has developed quite the controversy. The NASA Goddard Institute for Space Studies has created this short clip that visualizes the warming of Earth over the past 60 years. Supporters of the Global Warming theory feel that the video is solid proof of a dangerous trend while skeptics argue that 60 years is too short of a time period to fully understand climate change.

Space Shot of the Day: Footage of the Moon Orbiting Earth from Passing Spacecraft

On a mission to Jupiter with an arrival scheduled for July 4, 2016, NASA's Juno spacecraft captured this footage of the Moon orbiting Earth from a distance of about 600,000 miles. As it passed our planet, the spacecraft accelerated to more than 8,800 MPH in order to reach its final destination.

Time Lapse of the Day: 28 Years of the Earth from Space

Over 28 years of melting glaciers, depleted forests and expanding cities are shown in this Google time lapse project.

The Maui Space Surveillance Complex is a base ran by the Air Force Space Command and is responsible for keeping track of objects orbiting our planet such as weather satellites and space trash. Airman Magazine Online received exclusive rights to create this stunning time lapse video.

A New Perspective of the Day: POV Footage of Felix Baumgartner's Legendary Stratos Jump in Full-Length!

Check out this never-seen-before, multi-angle footage of Felix Baumgartner's historic 24-mile jump from the stratosphere, uninterrupted and complete with a real-time display of mission data.

Milestone of the Day: Curiosity Celebrates One Year on Mars!

To commemorate the first anniversary of Curiosity's landing on Mars, NASA takes a look back at the rover's twelve months of expedition so far in this video footage filmed from the rover's eye view.

Space Shot of the Day: A Green Nebula in Deep Space 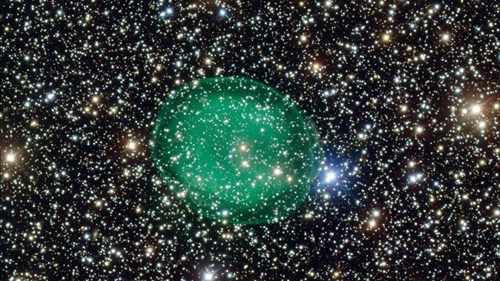 This fresh-outta-space image captured by the European Southern Observatory's Very Large Telescope shows the most detailed view of IC 1295, a planetary nebula lying 3,300 light-years away in the constellation Scutum, glowing in its ghostly green beauty. If you want more, check out the video released by ESO.

NASA's Deep Space Network antenna in Goldstone, California captured this striking footage of Toutatis, an asteroid that flew by on December 12 and 13, about 4.3 million miles from Earth. Meanwhile, the Chinese National Space Agency also took interest in the three-mile-long rock by coordinating its Chang'e 2 space probe to fly by and take pictures at a close proximity of 3.2 km (2 miles) and relative velocity of 10.73 km per second, according to an official statement. Toutatis is known to make a trip around the sun every four years and the next close encounter will arrive in November 2069. 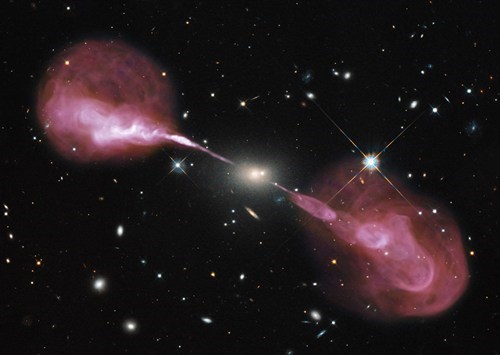 Here's a strange view of the Hercules A galaxy and its massive plasma jets stretching over one million light years , combined from a visible light image captured by the Hubble Space Telescope and a radio image take by the Very Large Array (VLA) of radio telescopes in New Mexico, USA. While the physics behind the shape of the jets remain unanswered, NASA says it is likely related to a supermassive black hole at the dead center of the image, which is estimated to be nearly 1,000 times more massive than the black hole at our Milky Way's center.