In Sunday's Euro 2012 final, the Italians, already losing by a wide margin, were forced to play a man down after losing their third and final substitution to injury.

After Spain went on to score two more goals to make the score 4-0, goalkeeper and captain Iker Casillas pleaded with the referee to end the match early out of "respect for the rival."

His gesture ended the Italians' misery just 30 seconds early, but it still deserves a place among some of the classier moves in sports. 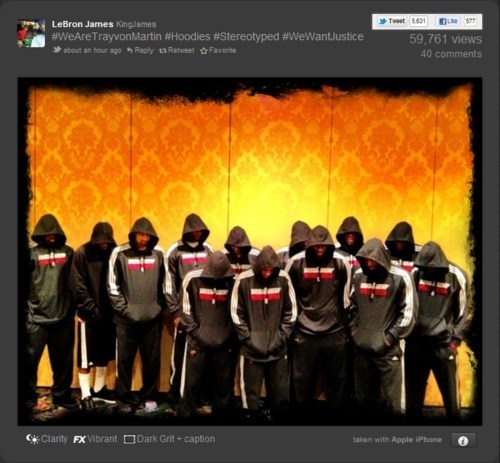 A short while ago, LeBron James tweeted this photo of him and his Miami Heat teammates wearing hoodies in solidarity with Trayvon Martin's family and friends.

According to the Palm Beach Post's Heat Zone, James is the one who organized the photo and made it happen.

Earlier today, Dwyane Wade also tweeted a photo of himself in a hoodie along with the hashtag #trayvonmartin.