Ripple the Dog Makes the Weather Report Much More Entertaining

This Cool Video Turns the Sound of Rain into Beautiful Music

Via thaltd
Repost
Recaption
Advertisement
The Daily What
Favorite

Damn Nature, You Scary of the Day: Time-lapse Formation of a Supercell in Wyoming

Via BasehuntersChasing
Repost
Recaption
The Daily What
Favorite

Gif of the Day: A Breathtaking Mothership Supercell

A supercell thunderstorm is characterized by a sustained and powerful rotating updraft. These storms originate in unstable air accompanied by a particular type of changing wind direction at various altitudes in the atmosphere; a common combination supportive of supercells is a southerly or southeasterly wind near ground level and a southwesterly or westerly wind higher up in the atmosphere.

This combination of changing wind directions creates a horizontal rolling motion in the lower atmosphere. The same rapidly rising air motions that form the thunderstorm turn this horizontal rotation into a vertical rotation, and in the case of this particular storm, this rotation is spectacularly evident in the circular striations, or layers, visible in the cloud structure.

The structure of supercell thunderstorms allows rain and hail to fall well away from the source of the warm, unstable air fueling the storm, so these storms do not choke on their own rain-cooled air. In some cases this allows supercell thunderstorms to stay intact for hours, covering tens or even hundreds of miles. In the process they can produce giant hail, very high winds, and tornadoes.

Damn Nature, U Scary of the Day: Close-Up Footage of a FLAMING TORNADO

Via Thomas Rogers
Repost
Recaption
The Daily What
Favorite

But hey, they need this.

Not a Single Damn of the Day: This Weather Channel Reporter Knows How to Handle a Videobomber

On Tuesday evening, the Weather Channel's Jim Cantore was in the middle of conducting a report at South Carolina's College of Charleston when, all of a sudden, a videobomber came out of nowhere.

Like a pro, Cantore knees the guy in the crotch and continues with the report.

I hope that guy is still in the fetal position right out of frame.

It's been so cold recently so why not try and freeze some things! Night Hawk In Light decided to freeze some giant bubbles in the cold.

The result?
Wispy shreds of frozen soap that look like plastic.

While the east coast continues to get blasted by more winter weather, there are plenty of people who are able to look on the cheery side of the snowy chill. During a recent news report in New Jersey, a man brightens things up with an energetic (and impromptu) air guitar performance.

Serious Satire of the Day: Watch This Argument For Naming Storms After Political Figures That Don't Recognize Climate Change

ClimateChange.org's video "Climate Name Change proposes in a satirical-yet-serious way that we change the way we name storms. The video's suggestion of naming storms after political policy makers that deny climate change is tied to their actual petition here.

Hurricane Paul Ryan does have a nice ring to it. What do you think?

Weather Report of the Day 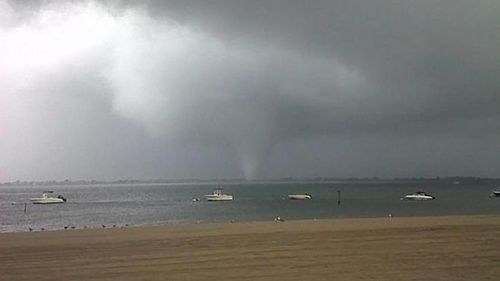 A rare tornado touched down in the Big Apple today, as wacky summer weather patterns continue their path of mayhem. This home video captures one twister in Queens, New York. All five boroughs are on tornado watch until 9 pm Saturday night.

In more devastating storm news, four people were killed in Oklahoma, including two grandparents and their grandchild, after fierce thunderstorms ripped through the region.

Meanwhile, on the left coast, Seattle is enjoying a near-record breaking 48th consecutive day without rain, which almost makes up for the 300 other days it rains every year. Almost.

Add in record droughts and heat Everywhere, and perhaps there's something to that whole Global Climate Change thing. Either that, or the Mayan's were right. Back to you, Al...