Promposal of the Day: Guy Asks Girlfriend to Prom By Jumping Out of a Plane

One guy from Connecticut has taken the “promposal” to new heights, literally.

High school students across the country have been coming up with creative ways of asking their dates to prom.

We’ve seen a guy stupidly pretend to be a suicide bomber and one kid who made a girl cry after she made fun of his elaborate road signs.

Eddie Staten wanted to do something extreme as well, and so he decided to express his love for his girlfriend by leaping out of a plane.

In the video, Staten holds up a sign that just reads “Talia, Prom?” It’s short, sweet and to the point, but apparently that was not enough.

The rest of the clip shows him skydiving with an instructor from a company called Skydive Danielson, who encourages his girlfriend to go with him.

“I hope she says yes,” Staten says while falling.

She did, according to NBC.

Daredevil of the Day: Guy Completes World’s First Triple Backflip on a Motorbike

FMX biker Josh Sheehan made history this week as the first motocross rider in the world to complete a triple backflip.

He performed the stunt at Pastranaland in Maryland on April 28, and he has pent the last year preparing for it.

Travis Pastrana, who owns the park, was the first to perform a double backflip back in 2006.

Extreme Sports of the Day: Watch People Jump Off the Princess Tower in Dubai

A bunch of thrill seekers in Dubai recently leapt 1300 feet off the Princess Tower, which is known as the world’s second tallest residential-only building (next to 432 Park Avenue in New York).

The stunt dubbed “Dream Jump Dubai” was a collaboration between SkydiveDubai, XDubai and a Polish company called Dream World which has created a mechanism that allows you to “experience freefall without deploying a parachute.”

The DreamJump system uses multiple zip lines and a harness, and it lets you drop for a longer amount of time than you can with just a bungee cord.

“Bungee is just one rope. This has two, so it is safer and more comfortable,” the creator, Thomas Zielinski, told The National. “If you use bungee, the experience can be like giving birth. This is more like eating an ice cream.”

Only ice cream doesn’t come with the risk of ending up on the ground flattened like a pancake.

There were also about 558 terrifying base jumps off the platform over the course of 6 days.

Battle of the Day: Watch a Group of Monks Peg Each Other with Snowballs

A group of Franciscan monks in Jerusalem was caught on video this week having a little fun in the snow.

Storms recently blanketed Israel with some cities receiving their first snowfall since the 1990s.

Watch these guys take a break from their religious duties to frolic in the white powder wearing dark hooded robes.

Razor, of Scooter Fame, Are Finally Making Our Drift-Ready Mario Kart a Reality

On the Last Day Before This Idaho Water Park Closes for the Season, They Let it Go to the Dogs

Threading the Needle With a Sweet Paragliding Jump

The World's Craziest Zipline Will Make You Parachute Down Halfway Through

Exhilarating Ride of the Day: Slip 'n Slides Are Way More Intense When They Follow a 5,000 Foot Drop

Like a Boss of the Day: What if We Could All Use Train Tracks With Skateboards?

There was a problem rendering this video - it may have been deleted.
Via Tomáš Moravec
Repost
Recaption
Advertisement

Awesome Moment of the Day: BASE Jumper Dean Potter Takes His Dog on the Ride of His Life

Before all the comment wars start: Dean Potter is an expert jumper who has done many stunts with live human beings strapped to his back before. This is no amateur move. And hey, his pup Whisper seems to have a pretty good time!

That Giant Water Slide in Bristol? It's Up and Running and Everyone Loves it. 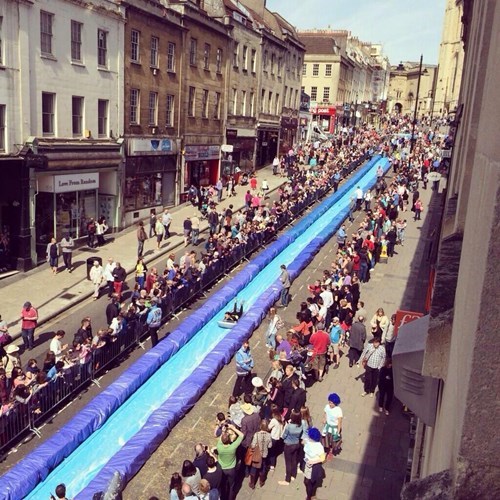 Russian Firefighters Make Their Own Fun, and it Puts Your Water Parks to Shame