Here's the "Pitch Perfect" way to shoot off your finger.

There are still some Solo cups involved, but they just get riddled with bullets.

A guy named Darryl from Ohio discovered that his girlfriend was cheating on him in a rather strange way.

He found a bowl of Honey Nut Cheerios in the sink, but they couldn't have been hers because she doesn't eat gluten. GASP! He also says he broke into her Facebook account afterwards confirming his suspicions.

So he decided to break up with her in an equally strange manner, requesting a video from musician Mac Lethal.

The final product: A cover of "Blank Space" by the Queen of Breakups, Taylor Swift.

You can stop stringing up those lights and nailing that Santa to your roof, because this street officially wins Christmas.
A stretch of more than 16 homes in Yucaipa, Calif. coordinated their holiday displays, which light up to music, and the entire show is being captured via drone.
"The Manning Street Christmas Music Light Show", as it is called, runs daily, and people in the area can park their cars and tune into 92.5 FM to experience it.
Coordinator Jeff Maxey uploaded a few different demo videos to his page. In addition to Mariah Carey's "All I Want for Christmas is You" (above), watch the homes perform "Wizards in Winter" by the Trans-Siberian Orchestra.

Cover of the Day: ‘All I Want for Christmas is You’ in 20 Different Musical Styles

"10 Seconds Songs" guy Anthony Vincent is back with a new video for the holidays, performing Mariah Carey's "All I Want for Christmas is You," in 20 different musical styles, including The Trans-Siberian Orchestra, Blink 182, Imagine Dragons and Alvin & The Chipmunks.

DJ Earworm has been mashing up the top 25 pop songs of the year since 2007 with his "United State of Pop" video series.
He released the 2014 edition on Wednesday, "Do What You Wanna Do," with all the songs you love but are too embarrassed to admit.
DJ Earworm, whose real name is Jordan Roseman, says this year's songs are more down tempo than previous years, so weaving them together is a bit more difficult.
"The thing that has been most notable in the past two or three years is the decline of EDM," he told Billboard. "The 'United State of Pop' became this dance track from '09 to '12, and then starting last year, there just wasn't enough in that genre to fully support it, so I went down-tempo."

Cover of the Day: Bing Crosby Gets Death Metal Treatment

This is what Christmas sounds like in Hell.
Composer Andy Rehfeldt has turned the classic tune "Rudolph, the Red-Nosed Reindeer" into a holiday headbanger.
Satan Santa approves.

Via Us the Duo
Repost
Recaption

Husband and wife musical team Michael and Carissa Alvarado, aka "Us the Duo," has taken all the big earworms from 2014 and compressed them together into one 2.5 minute acoustic recap.
The couple is famous for their "#6SecondCovers" on Vine, and their popularity led to them becoming the first musicians on Vine to sign with a major label.

No matter how sick you are by now of songs like "Shake It Off" or "Happy," they make them sound pretty good.

Music of the Day: OK Go Wants to Release New Album as DNA 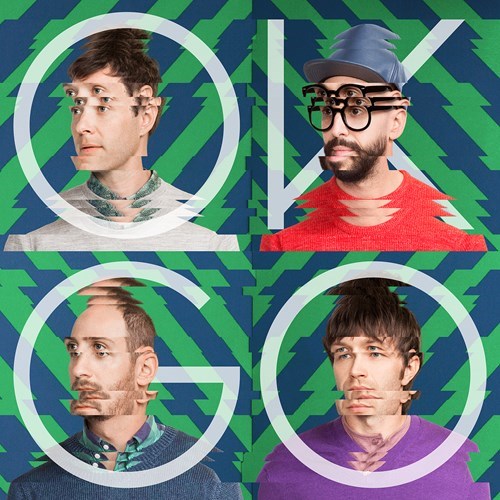 Via The New Yorker
Repost
Recaption

OK Go is trying to out weird itself once again.
The band known for their creative, over-the-top music videos involving treadmills, drones and Rube Goldberg machines wants to release their latest album "Hungry Ghosts" as DNA.
Lead singer Damian Kulash met with a biochemist at UCLA who successfully converted a book into DNA, so he got the idea to do the same with his music.
In addition to figuring out how to translate the songs into genetic code, there is also the issue of distribution - which they say could simply be a small vial with a few drops of water containing the strands.
"Obviously, it's an artistic gesture and a scientific project, not the most efficient way to actually buy our album," said Kulash.
So it's unlikely that deoxyribonucleic acid will kill the mp3 star anytime soon.

Remix of the Day: This Lenny Kravitz Lyric Video is Wonderfully Weird

This is the only Lenny Kravitz video you ever need to see.
Thanks to Neil Cicierega, the guy behind the '90s mixtape "Mouth Sounds," the hit single from 1998 "Fly Away" has been transformed into a new work of art with dragonflies and Milky Ways.
Watch all the way to the end to get to the nutty stuff inside this unexpected treat.

Duet of the Day: Idina Menzel & Michael Bublé Sing 'Baby It's Cold Outside'

While her "Frozen" co-star Kristen Bell is taking a more modern approach to Christmas songs, Idina Menzel is sticking with the classics - albeit one of the more controversial classics.
Watch them sing through the mouths of young children - for some reason - in a version of the song that also cuts out the alcohol references and some of the predatory innuendo from the original.

Mashup of the Day: Taylor Swift’s ‘Shake It Off’ with Aerobics Video from 1989 in Perfect Harmony

There was a problem rendering this video - it may have been deleted.
Via Thomas Jung
Repost
Recaption

Is this the new "Dark Side of the Rainbow?"
For some strange reason, Taylor Swift's earworm "Shake It Off" matches up in time with the 1989 Crystal Light National Aerobic Championship Opening video.
You've probably seen this bizarre of the spandex-clad dancers before, but now there's a whole new layer of weirdness and wonder to enjoy.

Star Wars Parody of the Day: All About That Base, No Rebels

Watch out "Jedi bitches." The Dark Side has never been sexier.
Nerdist is out with a new Star Wars parody of the hit song by Meghan Trainor, "All About That Bass" featuring Team Unicorn, Darth Vader cheerleading outfits and dancing storm troopers.
What more could you want, besides maybe a Jedi response via Nicki Minaj's "Anaconda?"

For another sci-fi parody of this song, check out this 'All About That Space' video.

When he isn't chasing around girls through the woods, Johnny Depp is breaking their hearts on stage with a guitar.

The actor made a surprise guest appearance during Marylin Manson's Halloween show at The Roxy in Los Angeles on Friday during "The Beautiful People."

T-Pain, the musician who popularized auto-tune to the extent where he even had his own iPhone app for it, is now showing the world in a concert for NPR, that he can in fact sing without the help of technology.

Based on this performance, he should probably ditch the auto-tune more often.

Tragic Loss of the Day: 13 Year Old Anna Died in a Traffic Accident Two Weeks Ago. Share in Her Memory by Listening to Her Playing a Beautiful Rendition of Downton Abbey's Theme Song.

An unfortunate accident detailed in this Dutch news article mentions Anna was hit by a car riding her bike. Anna was not wearing headphones and had her hood down to see. The driver was sober and was keeping to the speed limit. The entire incident is just tragically sad.