Tumblr: a magical website with the bizarre, the hilarious and the unexpected. Think you've seen it all? Think again. The best one-liners, random threads and weird thoughts are yet to be discovered.

If you've ever felt like the struggle is painfully real for you when it comes to identifying flirting, this quick Tumblr thread is here to reassure you that you are not alone. No, it turns out that studies have been conducted showing that humans are generally challenged when it comes to being able to identify actual flirting signals. Yeah, we're not out here reading minds. Facial expressions, underlying social habits of different individuals in different situations make for a disorienting melting pot, where it's pretty much impossible to tell what's going on.

Check out some more gold from Tumblr with this Tumblr post about humans' willful ignorance. We're terribly forgetful creatures.

Best Tumblr Tidbits From The Past Week

We love to check up on our friends from Tumblr every once in a while. It's a corner of the internet not many people brave but the payoff is usually worth it. Enjoy some funny Tumblr posts spotted and collected over the past week, and if you still haven't had enough fear not! There's plenty more where these came from. 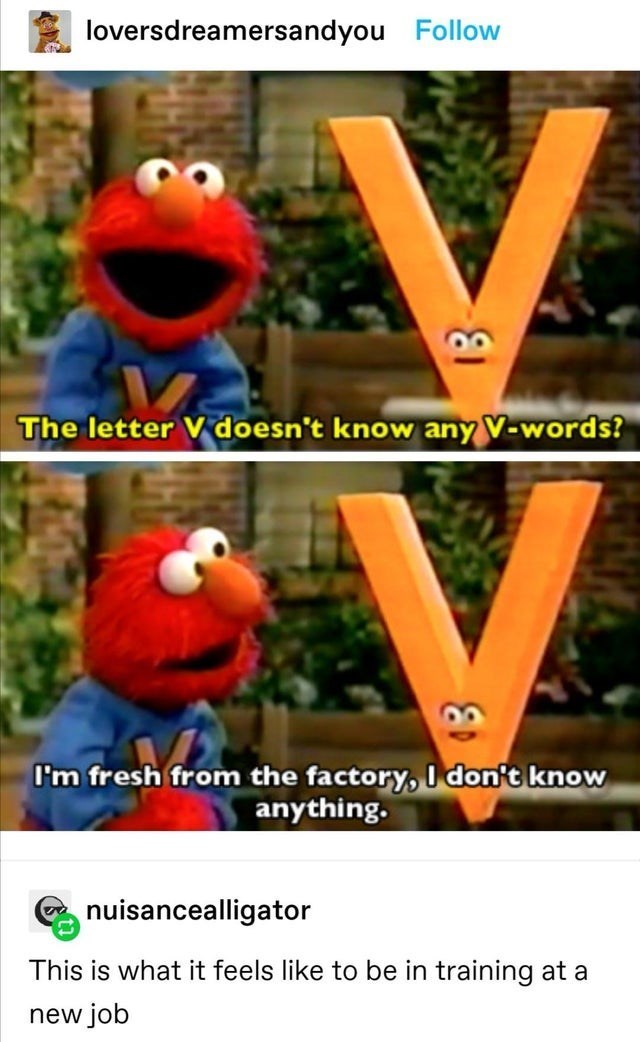 This fun Tumblr thread takes a quick look at some iconic moments in the history of the internet that could likely make civilizations that are thousands of years old, still laugh. Some things are just funny no matter what kind of societal conditioning you've had. Check out another interesting moment from Tumblr with this thread about "Thomas the Pain Engine." 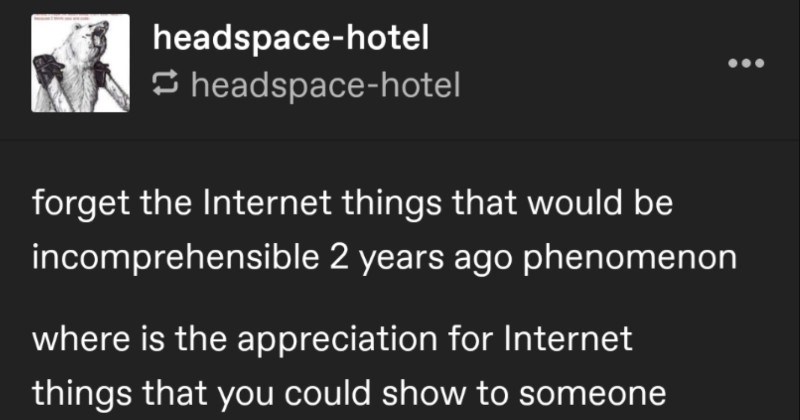 Tumblr Story: Wholesome Neighbor Is Helpful for No Reason

People from everywhere can come together even when they don't know each other, and are down to help complete strangers in need. It's not that hard to make people's day, as evidenced by this Tumblr thread about a chaotic good barista. 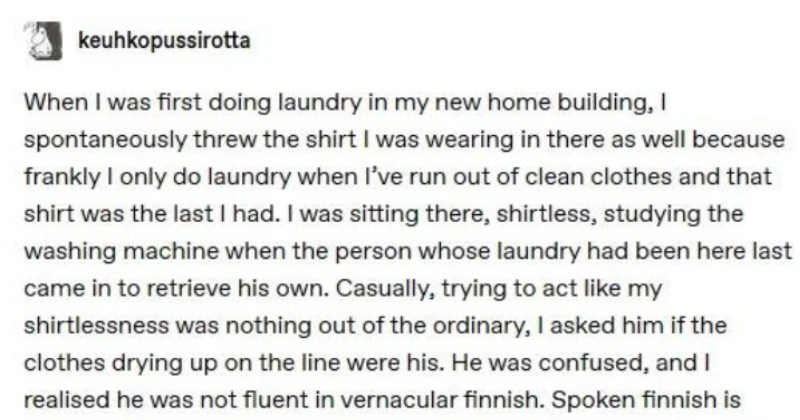 Having a long day? Feeling a little down? Don't worry, the meme doctor is here with your daily prescription of memes. I guarantee that you will laugh out loud. If these don't do the trick, then these funny Tumblr posts will definitely do the trick 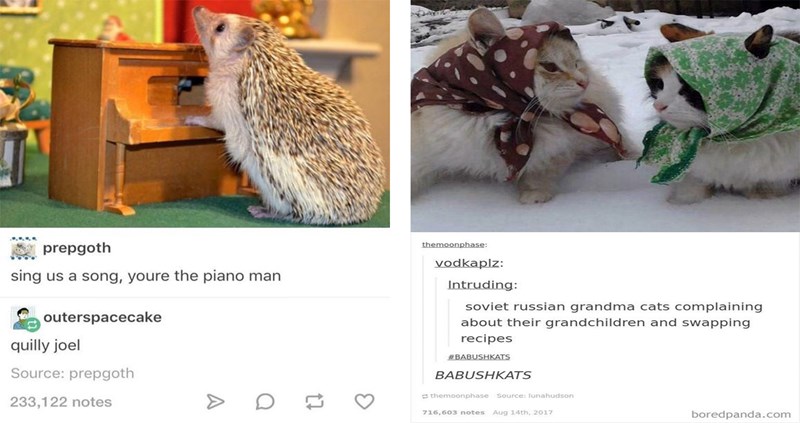 Tumblr Gets Deep And Funny About Animals

15 Times Tumblr just cracked us up when it comes to the furry friends in our life. Get ready for some good laughs when you scroll through... These funny Tumblr posts will really have you cracking up and wiping away tears, so be prepared. 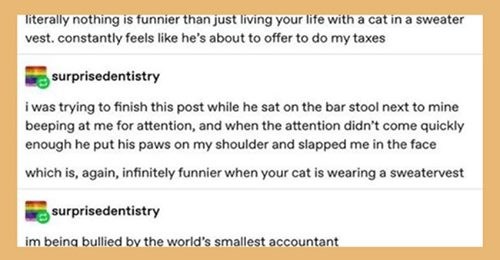 Tumblr is our guilty pleasure. Sometimes we like to make fun of it, but the truth is we can't stay away for long! And once you get a taste of how funny Tumblr can be you will also be coming back for more. To make things nice and easy we've rounded up the best Tumblr posts we've seen this week in one list, so stop stalling and get to scrolling! 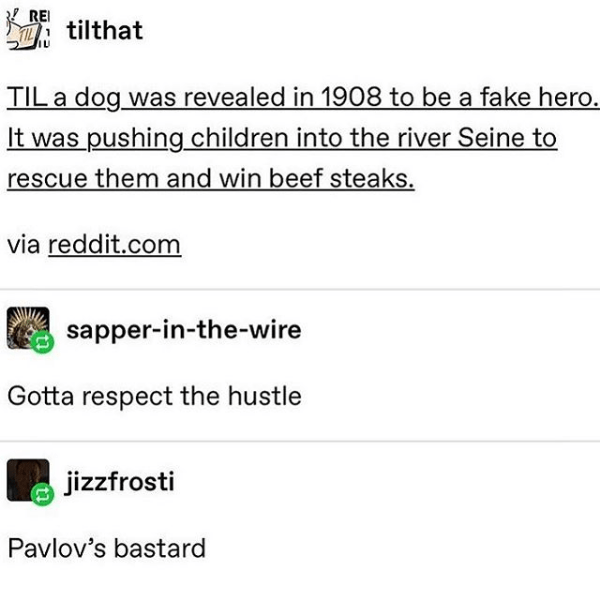 It's quick little tales like this that manage to temporarily restore our faith in humanity. This dude did not have to intervene when the Karen in front of them was making the Dairy Queen employee's shift all the more unpleasant, but they did. Oh yes, they did, and they did so when it came at zero benefit to them. That's the selfless kindness that the world needs. Plus, picturing Karen's face when she continued to witness someone else actively offsetting her toxic antics. 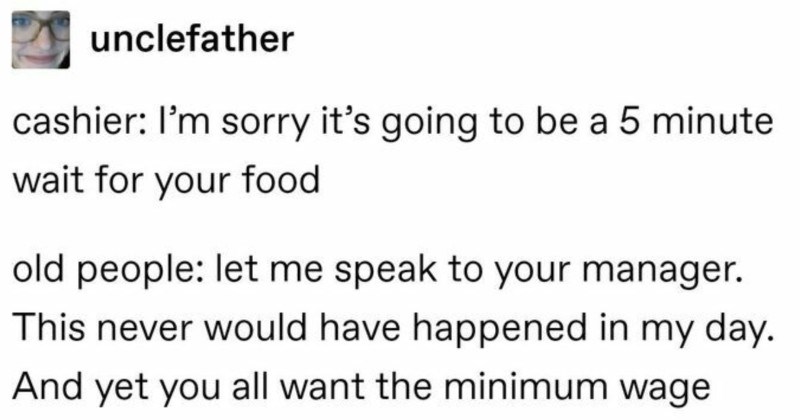 Today's top Tumblr posts are a perfect mixture of interesting and entertaining. If you don't trust us our word for it look for yourself! And once you're done here, consider checking out the previous list for an extra serving. 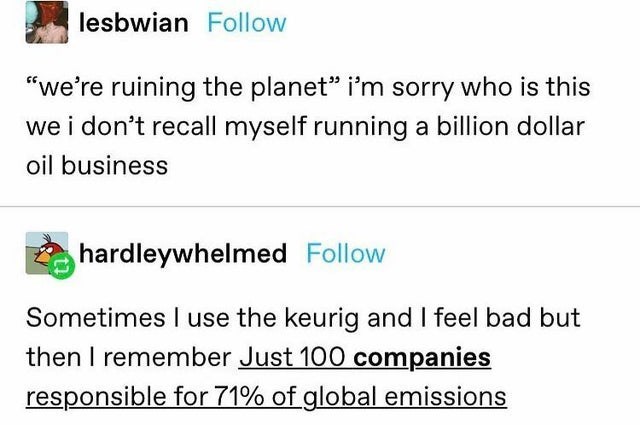 Enjoy today's collection of quality Tumblr posts that will remind you why the site still remains popular to this day. And check out the previous list if you're in the mood for more Tumblr highlights and tidbits. 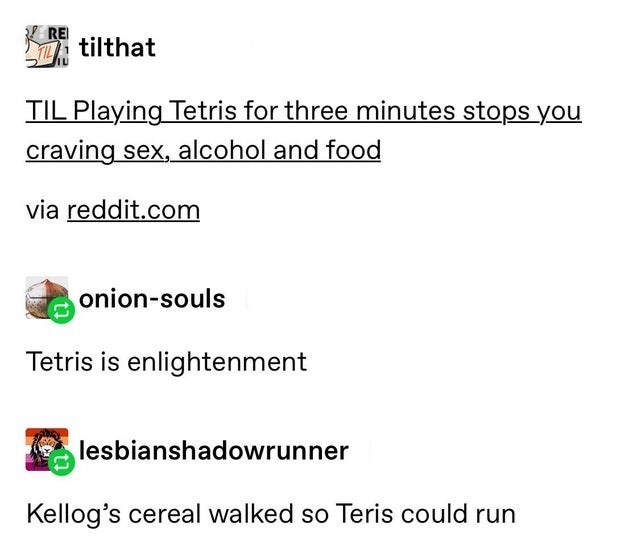 Those poor trains. As it turns out, the world of Thomas the Tank Engine was much darker than it might've appeared at surface level. Yes, we're talking a dark dystopian zombie train apocalypse kind of setting. Poor Smudger legit got turned into a generator after refusing to show off. If that isn't some kind of twisted way to scare kids into following the rules for fear of grave punishments, I don't know what it is. Whole lot of yikes, indeed. 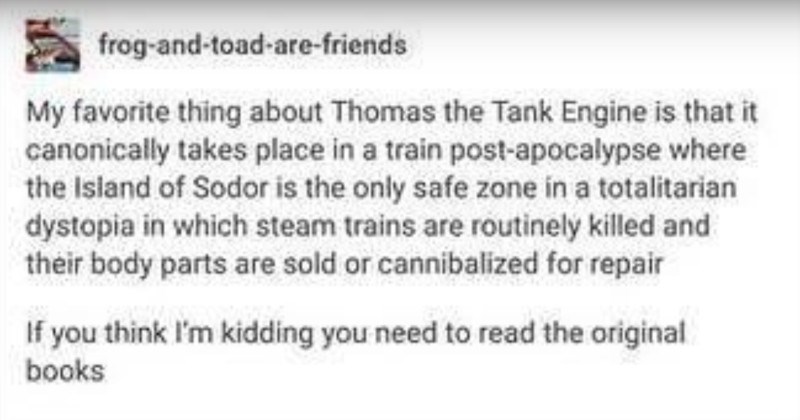 Enlightening Tumblr Thread On Meanings Of Figures Of Speech

We can all benefit from the pleasant reminder that we're actually radical human beings, and that the English language supports this theory. That being said, we haven't verified these, so they could be totally pulled out of thin air. Doesn't mean we weren't entertained. 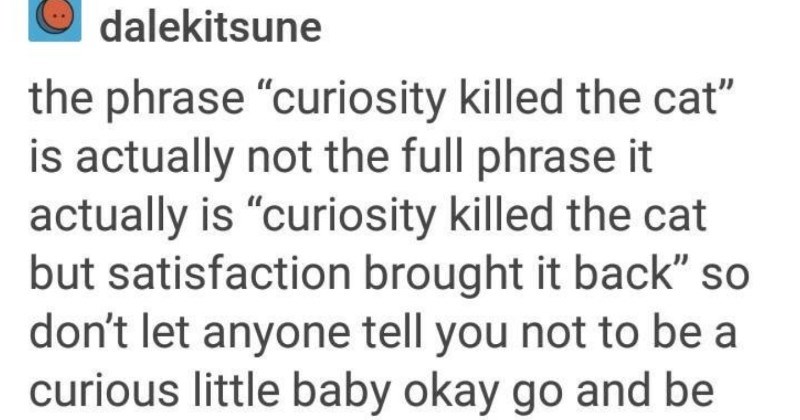 Kinda Depressing Memes For People Who Have Lost Faith In Humanity

2020 is a f*cken wash, y'all, and we are over it. As is such, please have some depressing memes that will remind you of how much everything sucks. eBaum's World has more 2020-specific content here. 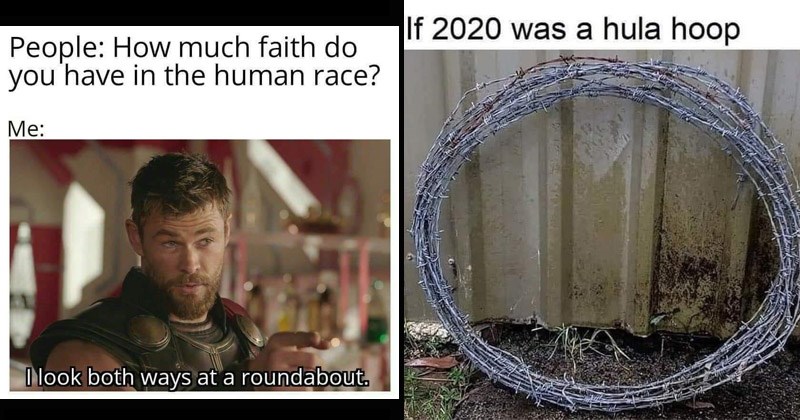 Some people just seem impossibly happy. It's like no matter how many curveballs the world tosses their way, their positive never falters. Take this barista for instance: clearly the barista is at complete peace with where they've found themselves in lives, and thus proceeded to have some fun with their job, and definitely not waste time taking it too seriously. Those drink nicknames are gold. 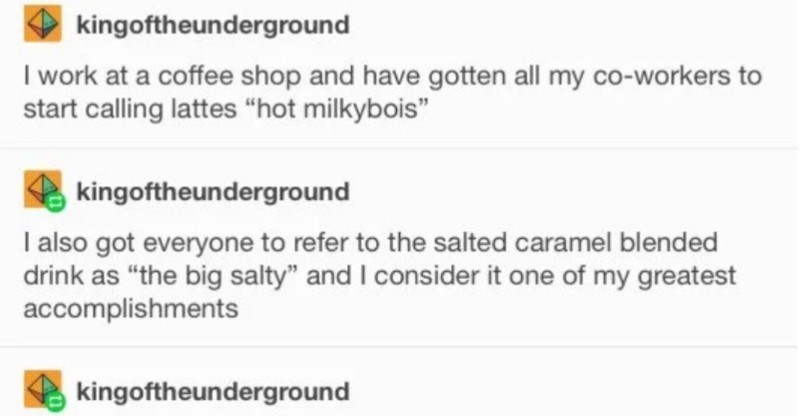 Another dip into the wild world of Tumblr. What will you find? No-one knows. Will it be funny? Absolutely. We have hand-picked the funniest, most relatable, Tumblr posts for you this afternoon and boy oh boy, are you in for a treat. Put down everything, shut the curtains, barricade yourself inside, and get ready for the funniest Tumblr posts of the day. 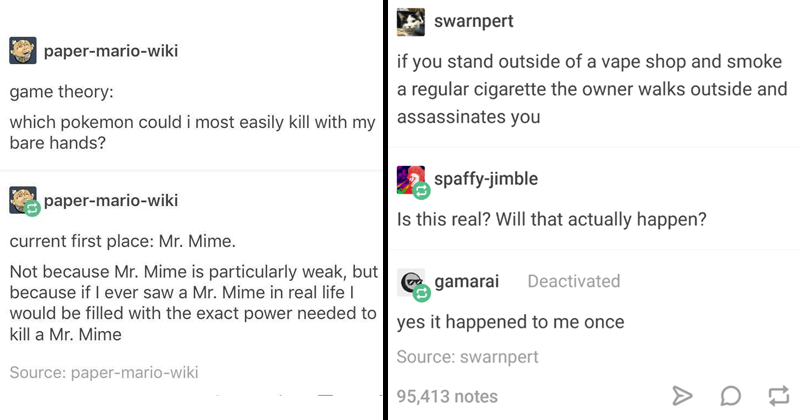 This quick and entertaining gem from Tumblr highlights some notable moments that anyone might be apt to encounter if they were to take the "great American road trip." The one thing they needed to include was all that empty space. 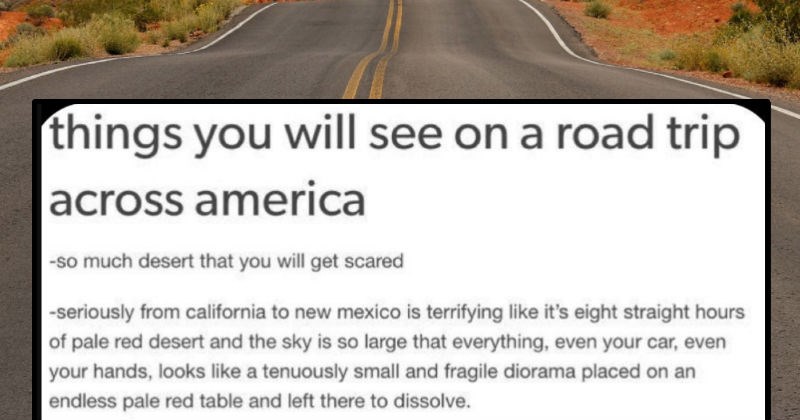